Minnesotans with disabilities enter a new decade with the start of 2020. A look back at 2019 reveals a year of gains and losses for the community.

Much progress was made on disability issues at the 2019 Minnesota Legislature, as issues that had languished for years found traction and needed support. Gains were seen in everything from caregiver compensation to programs for specific disabilities.

But community members found mixed results at the local government level, with the loss of new drive-through services in Minneapolis as a notable example.

Our organizations continued to go through a time of mergers and changes in response to shifts in funding and needs. The community also lost several of its key figures.

The Minnesota Consortium for Citizens with Disabilities (MNCCD) began the year with big changes. Executive Director Sheryl Grassie stepped down after more than three years at the helm. Other staff members also left. MNCCD operated with contract lobbyists and a lot of volunteer power going into the 2019 legislative session. Organization board members and other volunteers rallied to help.

It was an early start for the 2019 Minnesota Legislature. MNCCD and the Minnesota 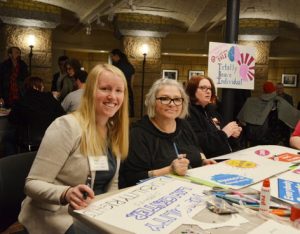 Council on Disability were among many groups bringing bills to the capitol.

One big need was to rectify a seven percent cut made to waiver services. The cut had been resolved during the 2018 session but fell victim to then-Gov. Mark Dayton’s veto of an omnibus bill.

The organization Lupus Link shut down due to ongoing financial challenges. The group began in 2017, taking over the work of the Lupus Foundation of Minnesota after it closed. Research would continue but those seeking other services would have to look elsewhere.

Two longtime disability community nonprofits, Ally People Solutions and Community Involvement Programs (CIP) announced a merger. The merger took effect April 1, with the new organization under the name of CIP. Changing times in the nonprofit world and in the disability service system drove the merger, including cuts to Medicaid and changes to a government rate management system. The combined organizations brought more than a century’s service to people with disabilities.

Bills were pouring in, and self-advocates and their allies were already busy at the capitol. One high-profile effort was by the PCA Reform Coalition, which shone a spotlight on the needs of the personal care assistant program.

An ANCOR Foundation and United Cerebral Palsy report showed a drop in rankings for the state’s inclusion-focused programs.

The push to make changes to disability programs and policies continued at the capitol. The annual Disability Day took on a sense of urgency, as programs that had missed out on funding and changes in 2018 were brought forward again.

Disability advocates were honored after their deaths. St. Cloud area resident Kathy Wingen, who lived with cerebral palsy, was remembered for her efforts to provide transportation services and basic access improvements, was 60. Douglas A. Fenderson, a retired University of Minnesota professor who did pioneering work in the area of disability and rehabilitation medicine, died at age 90. Fergus Falls area resident June Lacey was a longtime volunteer who didn’t let her disabilities slow her down, even when she was in her 80s.

A concept of live-work, person-centered housing with support services was unveiled by Shamus O’Meara and Chris Gibbs. They hoped their project design would provide good options for people with developmental disabilities who wish to stay in their home communities.

As the 2019 Minnesota Legislature reached the halfway point, much business remained unfinished. Disability Services Day, sponsored by the groups AARM and MOHR, drew a huge crowd.

One key focus was mental health issues. Mental Health Day on the Hill drew self-advocates and their allies from around the state. A recurring theme was that while mental illness doesn’t define people, their strength and courage does. Another emphasis that because mental illness and related issues are multifaceted, a comprehensive approach needs to be taken to address the range of people, their ages and their issues.

Supporters of the Special Olympics breathed a sigh of relief as the program was spared budget cuts proposed by President Donald Trump.

The History Note featured candles made in Minnesota and elsewhere to honor President John F. Kennedy after his 1963 assassination. Opportunity Workshop in Minnesota was one of 12 sheltered workshops where the special candles were made.

Oversight of Minnesota’s Olmstead Plan work was debated in a U.S. District Court hearing in St. Paul. DHS officials argued that federal court oversight could end. Minnesotans with disabilities disagreed and said that the monitoring in place since 2011 should continue.

The fate of the Health Care Provider Tax was one of many issues in play as the 2019 legislative session wound down. Walz wished to extend the tax but the Republican-controlled Senate staunchly disagreed. More than 100 groups lobbied in support of the tax. 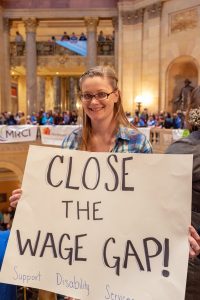 The wage gap for direct support staff was an ongoing issue in 2019, at the state capitol and beyond.

Another key focus in the final weeks of the session was to provide higher wages for direct care workers and to include a competitive workforce factor in the health and human services omnibus bill.

Walz and the Governor’s Council on Developmental Disabilities announced the “One Minnesota” initiative and established a state council on diversity, inclusion and equity. Much of the group’s work at the start was to be based on a survey of Minnesotans with disabilities.

Many gains were celebrated at the close of the 2019 legislative session. Gains were made on staff wages as a bill was signed including a wage increase as well as a competitive workforce factor for the Disability Waiver Rate System. More than 30,000 Minnesotans who rely on support services celebrated the win.

Lawmakers also reached a compromise on the health care provider tax, sparing the services it funds. Another win was the repeal of a state purchasing program for incontinence products. Those in the Medical Assistance Tax Equity and Fiscal Responsibility Act (MA-TEFRA) saw reductions in parental fees. State parks access got a boost as did mental health programs. But no agreement could be reached to cut the high cost of insulin.

Farmington High School’s robotics team was honored for building customized wheelchairs. The team was invited to the White House.

Pamela Hoopes, deputy director of the Minnesota Disability Law Center, was honored upon her retirement.

After their deaths, John Schatzlein and Jennifer Mundl were remembered for their years of service to Minnesotans with disabilities. Both were disabled in accidents as young people. Schatzlein was praised for his years of advocacy on access issues and his willingness to reach out to and support Minnesotans with spinal cord injuries. Mundl was 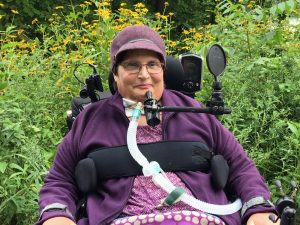 recalled for her vast knowledge of assistive technology and her efforts to find creative solutions for people.

U.S. District Court Judge Donovan Frank announced that federal court oversight of the Olmstead Plan and plan compliance would continue into 2020. All court-ordered reporting mandates would go on.

A review of new state laws continued, with a look at a crackdown on cell phone use while driving and steps underway to address the state opioid crisis.

Can Do Canines leader Alan M. Peters was honored by St. Mary’s University. He was given the LaSallian Service Award in honor of his working providing service dogs to those in need. 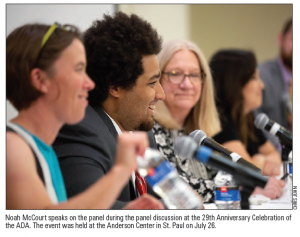 Turmoil at DHS was under scrutiny by state lawmakers. The resignation of Commissioner Tony Lourey, resignations of other top officials and allegations of hostile leadership were made. The longtime director of the Medicaid program resigned. A veteran compliance officer also raised red flags about practices at the large state agency. Gov. Tim Walz’s administration moved quickly to bring in veteran public and nonprofit official Pamela Wheelock to serve as interim department head.

Discrimination was the focus as Minnesotans celebrated 29 years of the Americans with Disabilities Act (ADA). The 2019 event was hosted by Hamline University in St. Paul and featured a panel discussion, awards presentations, question and answer period with Minnesota Department of Human Rights Commissioner Rebecca Lucero and music and a speech by Gaelynn Lea.

New disability accommodations were announced for the upcoming Minnesota State Fair. One addition was that of St. Catherine University students to assist with American Sign Language (ASL) interpretation. The university is in St. Paul and offers ASL.

The new Minnesota Department of Human Services commissioner is Jodi Harpstead, a veteran of organizations including Lutheran Social Services. Harpstead took over an agency plagued by allegations that now included financial mismanagement. She acted quickly to make changes and add controls over programs and spending. State lawmakers grilled Harpstead during meetings, with some demanding that the state agency be split up.

The Minneapolis City Council took action to ban new drive-through services, despite objections raised by people with disabilities. The city’s Advisory Council on People with disabilities also objected, cited the difficulties such a measure would create. Existing drive-through windows at restaurants, coffee shops, banks, dry cleaners and other businesses can remain, but new ones cannot be built. St. Paul officials have discussed similar restrictions. 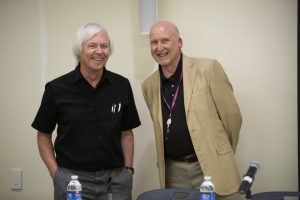 Jon Skaalen (left) and Craig Dunn (right) were honored for their work at VSA Minnesota. The organization shut down in fall 2019.

funding challenges and the retirements of key staff.

Should people with terminal illness be allowed to end their own lives with the help of doctors and other medical professionals? Or would state law allowing such a practice be misused, to end the lives of vulnerable people? Would people with disabilities become targeted under such a law? More than 200 people filled hearing rooms to hear debate on the highly emotional and controversial proposal under consideration by the Minnesota House. 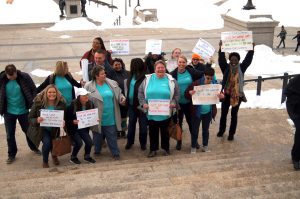 People with disabilities and their allies made themselves heard at the capitol in 2019.

The hearing before the House Health and Human Services Policy Committee was informational and went on for hours. Dozens of organizations are weighing in, with some in support, others in opposition and still others offering qualified support if there are ways to prevent abuse of such a law.

A class action ruling was seen as a huge win for Minnesotans who live or have lived in group homes. A case filed in 2016 on behalf of Tenner Murphy and others, seeking changes in the state’s Medicaid system, was allowed to move to trial.

Minneapolis and St. Paul “smart technology” parking meter or pay parking kiosks that don’t meet Americans with Disabilities Act (ADA) standards for accessible design and must be retrofitted in order to settle litigation against the two cities. Many people with disabilities have struggled to use the parking meter pay stations in in downtown Minneapolis and St. Paul, especially since the Cale system was installed several years ago. The biggest complaint is that for people who use wheelchairs or scooters, the buttons to punch to indicate parking space number and the pay slots for card or cards are too high to reach.

Additional oversight was promised for the state’s troubled opioid program, after allegations of overpayments. But the issue of who should cover overpayments remained.

Minneapolis’ recently completed Peavey Plaza redesign work won kudos for needed upgrades as well as accessibility improvements. The downtown plaza was eyed for demolition, but that was stopped by a lawsuit. Instead a needed upgrade and renovation project took place.

When the 2020 Minnesota Legislature gavels into session in February, two longtime champions of disability issues won’t be there. Fifteen-year Rep. Diane Loeffler (DFL- Minneapolis) lost her battle with cancer. Four-term Rep. Nick Zerwas (R-Elk River) announced in November that he was stepping down for health and family reasons.

When the 2020 session of the Minnesota Legislature starts, MNCCD will be ready. A wide range of issues, from proposed changes in rules for PCAs to public facilities access, are on the group’s legislative agenda. MNCCD met much success in 2019, with 11 of 18 policy priorities meeting a favorable response from state lawmakers. That was seen as an accomplishment to build upon.

ProAct once again ran its successful Holiday Lights recycling program. Strings of holiday lights that had lost their sparkle, along with old cords, were to be dropped at designated sites and then recycled by people with disabilities. The program adds drop-off sites every year. ■