Civil war combat veterans who were disabled continued to serve in the Union Army. Most of them landed in the Invalid Corps, a unique 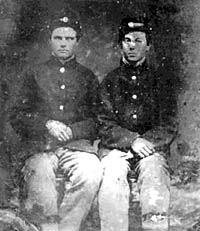 military unit organized in May 1863 to meet the Union Army’s growing need for manpower. During its years of service, the Invalid Corps troops enforced the draft, guarded prisoners and vital outposts, protected rail lines and supply depots, and served as military police in cities all across the country. Members of the Corps even escorted President Lincoln’s body home to Illinois. 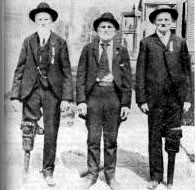 Two of these members were Robert Armstrong and Mason Myers. Both Myers and Armstrong lost legs at the Battle of Gettysburg — Myers lost his right leg on the first day, Armstrong his left leg on the second day. This photo is from a June 11, 1910, Syracuse Post-Standard newspaper article, identifying the men as (left-right) Myers, A. J. Potter, and Armstrong, “lifelong friends and members of [GAR] Post 282.” The caption said that Myers and Armstrong “are neighbors, and even wear the same size of shoe. Now, when their footwear gives out, they buy one pair of shoes between them, and Mr. Myers wears the left shoe and Mr. Armstrong the right.”