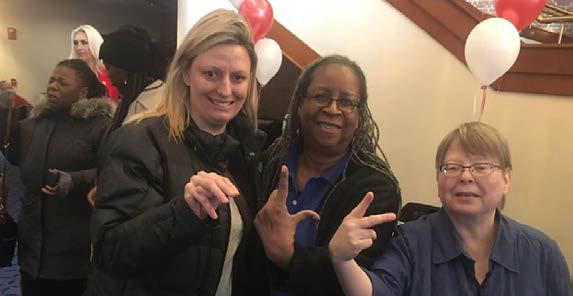 Minnesota’s 33rd annual Martin Luther King, Jr. Celebration was held in St. Paul at the Ordway Theater. A large crowd was on hand to enjoy performance and speeches, and honor award winners. Mae Jemison, a NASA astronaut for six years, was keynote speaker. She was the first woman of color in the world to travel to space. In addition to honoring King’s legacy, the event celebrated women of color in STEM (science, technology, engineering and math).

The event is run every year by a committee, with help from groups include groups and commissioners for people with disability. The entire event was accessible, with accommodations offered for people who have visual disabilities and who are deaf, deafblind and hard of hearing. One of the groups involved is the Minneapolis/St. Paul Black Deaf Advocates.

The 10-acre Shriners Hospital Minneapolis campus is for sale. The listing was announced in February. It’s part of a transition for Shriners’ Twin Cities operation as it moves from traditional hospital to outpatient care. The Twin Cities office of Colliers International has listed the property.

Shriners is in southeast Minneapolis along East River Parkway, near the border with St. Paul. It is just south of Interstate 94. The campus overlooks the Mississippi River. A new owner could use the current buildings or demolish them. The property is in a residential neighborhood with a mix of single-family and multifamily homes.

A sale and move will be the end of an era for Shriners, which opened a hospital at the location in 1923. The current facilities date from 1991 and include a conference center, small hotel and skyway-connected parking ramp with 172 spaces. There is also an auditorium, operating rooms and even a small prosthetics factory.

Putting the property up for sale is the latest change for Shriners, which laid off more than 60 staff members in September 2018.

The plan is to move to a smaller building, keeping the current location open until a move is made. The hospital itself has 104,000 square feet of space, with two operating rooms and 19 inpatient rooms.

Shriners Hospitals for Children is a network of 22 non-profit medical facilities across North America. Children with orthopedic conditions, burns, spinal cord injuries, and cleft lip and palate are eligible for care and receive all services, regardless of the patients’ ability to pay.

Hospitals are owned and operated by Shriners International, a Freemasonry-related organization whose members are known as Shriners. Patients must be minors under the age of 18 and are not required to have any familial affiliation with the Shriners order nor Freemasonry.

The Arc Minnesota has announced that Andrea Zuber will become its new chief executive officer, effective February 19. The Arc Minnesota Board of Directors confirmed the new leader at its January board meeting. Zuber will provide executive leadership, vision, and strategic direction for the nonprofit to provide consistent, essential services to support more people with intellectual and developmental disabilities and their families throughout Minnesota.

“The Arc Minnesota Board is excited to welcome Andrea Zuber as our new CEO based on her demonstrated ability to lead change that makes an impact,” said Mike Wall, board chairman. “We look forward to her leadership as we work together to remove barriers and increase access to opportunities for people with intellectual and developmental disabilities and their families throughout the state.”

Zuber is currently director of social services for Dakota County. She has spent her entire career leading the development and delivery of social services with extensive experience in transforming support for people with disabilities and their families. As a county department director, she championed full inclusion for people with disabilities and people with mental health challenges, integrated employment and housing, and was a recognized as a sponsor and leader in the implementation of diversity, inclusion and equity work.

Her 22 years of experience in the disability field includes leadership roles at the Minnesota Department of Human Services, Ramsey County and Arc Great Rivers. She has been actively engaged in partnerships and collaborations based on her experience with organizations that support inclusion for people with disabilities including People First Minnesota and the Minnesota Disability Law Center Citizens Advisory Council. She served on the University of Minnesota’s Institute on Community Integration Citizens Advisory Council, the Minnesota Employment First Coalition, and was engaged in efforts related to the development and implementation of the Minnesota Olmstead Plan.

“It is an honor and a privilege to lead The Arc Minnesota at this time,” said Zuber. “Working together with all who believe in a bright future for people with intellectual and developmental disabilities and their families, we will be committed to creating hope, connections, and opportunities to support all Minnesotans plan for and live their best lives.”

The Arc Minnesota provides services to support people with intellectual and developmental disabilities and their families.

Nine Twin Cities arts organizations were awarded ADA Access Improvement Grants by VSA Minnesota. The nonprofits will use the grants, totaling $82,635, to make arts programs more accessible to people with disabilities. Since 2010, 149 projects by 76 different organizations have now been funded, totaling $1,705,635.

VSA Minnesota has administered the ADA Access Improvement Grant program since 2010 for the Metropolitan Regional Arts Council (MRAC). MRAC will administer the program after VSA ceases operations in September. The purpose is to enable nonprofit arts organizations in the seven-county Twin Cities area to improve their programs, projects, equipment, or facilities in ways that have the potential for significant or long-term impact in involving more people with disabilities as participants or patrons in arts programs.

Art Works Eagan, Eagan, was award $15,000 to install automatic door openers for six to eight strategically targeted doors in its facility. The project is necessary to make its gallery and event spaces easily accessible for clients, volunteers and community members with mobility challenges.

In the Heart of the Beast Puppet & Mask Theatre, Minneapolis, was awarded $9,000. In the Heart of the Beast seeks funding to increase the accessibility of its largest annual event, the May Day parade, ceremony and festival. More than 60,000 people attended the parade last year. The theater wishes to hire an accessibility coordinator to help the theater establish long-term relationships with communities of people with special needs, redesign its studio space layout for community workshops, and increase accessibility offerings the day of the event.

Jewish Community Center of Greater St. Paul, St. Paul, was awarded $7,500. The grant will be used to increase the number of people with hearing loss attending JCC cultural arts events through the installation of a frequency modulation assistive listening devices in its Center for Performing Arts.

Leonardo’s Basement, Minneapolis, was awarded $5,345. Leonardo’s Basement will procure hardware that will support individuals with cognitive disabilities and physical impairments. This will include an automatic door operator, adjustable height workbenches and noise-reducing headphones. Support from VSA Minnesota will help make arts learning workshops accessible to all 14,000 students served annually.

Pillsbury House Theatre, Minneapolis, was awarded $15,000. Funds will be used to transform a neglected room on the second floor into a sensory room for young people in programs who have learning difficulties, developmental disabilities or sensory impairments. The special room will have a myriad of interactive elements that woul encourage young people to engage and explore the environment which will have a positive effect on their ability to react and interact with the larger world around them.

Playwrights’ Center, Minneapolis, was awarded $9,716. The project is designed to deepen the Playwrights’ Center’s outreach by improving the accessibility of its services and resources for people with disabilities, who are underrepresented among its fellowships, mentorships, membership and educational programs.

Founded in 1986, VSA Minnesota is a statewide, nonprofit organization whose mission is to create a community where people with disabilities can learn through, participate in and access the arts. It is an affiliate of VSA, a program of the John F. Kennedy Center for the Performing Arts in Washington, DC.

The next grant application deadline is May 1. $82,635 will be available to award. Go to www.vsamn.org for details. 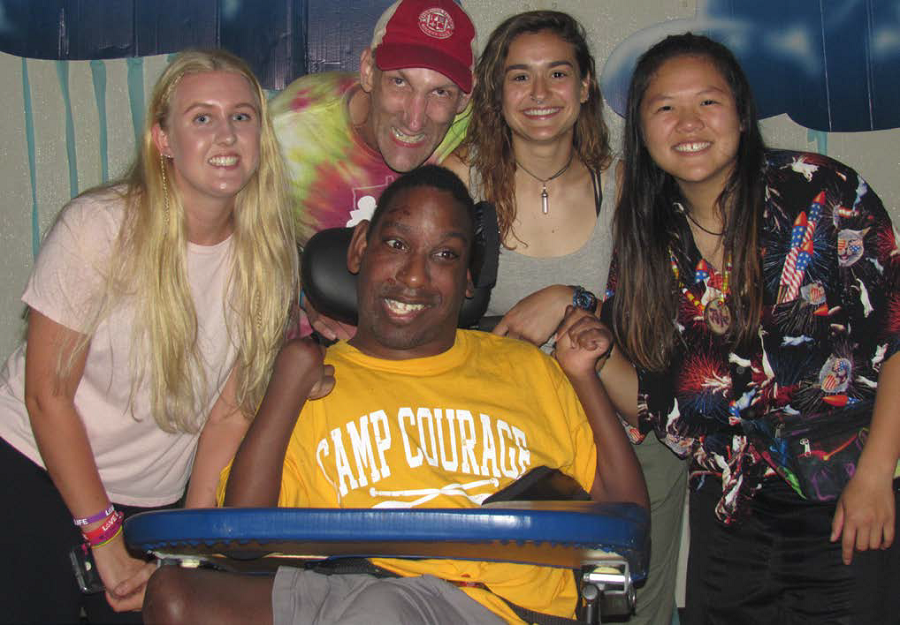 True Friends, which provides an array of experiences for people of all abilities, has received a $100,000 donation from the Norman C. Skalicky Foundation and Stearns Bank to benefit its general operations.

“This generous gift from the Norman C. Skalicky Foundation and Stearns
Bank makes it possible to carry on our mission of high quality, personalized
care to our clients,” said John LeBlanc, President and CEO of True Friends. “I
know our clients and board of directors are very thankful for this gift.”

“Stearns Bank has always been passionate about giving back to the community, even more so to those needing a helping hand,” Norman Skalicky said. “The work of True Friends to enhance self-esteem and independence aligns well with our mission to help foster growth and success.”

While True Friends programs provide life-changing experiences for our participants, programs also offer caregivers a moment of respite; a chance to rest and to relieve the stress that sometimes occurs while caring for individuals with special needs.

With locations near Maple Lake, Annandale, Plymouth, Eden Prairie and Bemidji, True Friends serves individuals in Minnesota and throughout the United States.

The True Friends program is the result of two legacy service providers joining forces in late 2012. Courage Center Camps and Friendship Ventures partnered to create a new camp organization to serve people with disabilities. Both organizations had rich histories of providing exceptional and much needed services. Camp Courage was established in 1955 to service individuals with physical disabilities.

Friendship Ventures was established in 1964, serving participants with
developmental disabilities and special needs. The True Friends name was adopted in 2013.

True Friends provides life-changing experiences that enhance independence and self-esteem for children and adults with disabilities. Its programs and services include summer and winter camp, day camp, respite, therapy riding, travel and team building. It serves individuals with physical, developmental and learning disabilities.

Through partnerships with other organizations, True Friends also hosts a wide variety of health and education camps. With four Minnesota camps and a Twin Cities office in Plymouth, it serves almost 25,000 individuals of all abilities each year.

Norman C. Skalicky is CEO and Chairman of Stearns Bank, N.A. The bank has locations in St. Cloud, Pine City and North Branch.

The Norman C. Skalicky Foundation was formed in 2001 with the help of the Central Minnesota Community Foundation. Since then, the foundation has
initiated several fundraising challenges and supported various community causes to benefit those in need.

Invest in Access Press! We offer Access Press for free because our news is vital to the disability community and money shouldn't stand in the way. DONATE TODAY
Loading Comments...